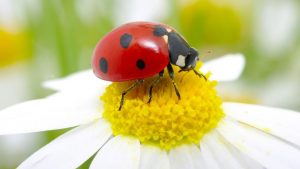 Ladybugs can be a nuisance when they enter into a structure, but it is not illegal to kill them. Ladybugs are beneficial. They can help with eating other bugs that tend to feed on plants. They like to eat aphids, which like to feed on roses and other types of flowering plants. When walking around the yard you may encounter many different types of ladybugs. They can range from red with black spots to solid black, yellow or orange. Some have no spots on their wings to those with a couple dozen black spots, from very small species to some nearly 1/2 inch long. The larvae are often misunderstood and misidentified by people who believe they must be a plant feeding bug, but the larvae too are voracious predators that can clear a patch of aphids very quickly. They are usually a patchwork of red and gray spots and are described as “those tiny alligators”. When they pupate they attach to the trunk of the tree, side of a building, or any other convenient hard surface. There is one species that is a concern to plant health, and that is a yellowish species called the Mexican Bean Beetle. It is widespread in the eastern U.S. and in Mexico, generally occurring east of the Rocky Mountains. True to its name it feeds almost exclusively on legumes of many kinds, so if your vegetable garden is growing beans or peas then this beetle might be a problem. If so, a contact insecticide labeled for use on vegetables would be effective in killing them when the larvae first appear. This family of hundreds of species has only a couple of plant damaging species in it, and the rest are highly beneficial as predators, the likelihood is that the ones you are seeing are some of the good guys and should be encouraged rather than killed….